Whether you’re in the market for your first snowboard or looking to change things up a bit from your current setup, the camber profile of your board is super important.

There are four major types of camber profiles for you to consider when looking at a new shred stick: 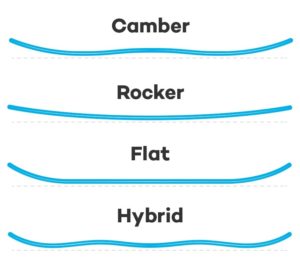 Traditional Camber is just that, traditional because it used to be the only way boards were made until the early 2000’s. A camber board has the points of contact under that feet and a slight rising arch in between the feet. This type of board is perfect if you want a stable ride and solid edge hold for carving groomers. It is also good for extra pop in the park yet with these advantages comes disadvantages and for beginners, traditional camber does have a tendency to catch edges easier which if you haven’t done before it is not fun. It also struggles a bit more in powder due to its lack of ability to float.

Rocker profiles are super fun. Also known as reverse camber, and with that said, the arch between the feet is flipped upside down and thus there is only one point of contact between the feet. In terms of how it rides it’s much more forgiving so you most likely won’t be catching edges and having a bad time, its also easier to press and butter, however as it is reverse camber the edge hold is somewhat sacrificed in this profile meaning the board may wash out on turns more so than a camber board.

Flat or Zero Camber is just that… flat between the feet. Its not traditional camber, not reverse camber and so as you may guess it’s performance is somewhere in the middle of the two aforementioned profiles. It is a perfect board if you’re wanting to get into rails and boxes more and due to their long point of contact it is great for carving and riding pipe yet due to the lack of shape there is a relative lack of pop and slower than your traditional camber yet more stable than a rocker. A good all mountain board for those wanting general all round progression.

Hybrid boards are generally a mixture of camber and rocker and can come under a plethora of names such as Gullwing, Flying V, CamRock yet its all dependant on the brand as to what they call it. The hybrid boards however aim to take the best bits of traditional and reverse camber and blend them into one board, usually creating something softer and more forgiving than a camber board but not quite as stable in its edge hold or on rails. These boards are sometimes very good in powder yet as there can be multiple combos of hybrids board I would definitely suggest talking to your local snow store about which hybrids they have available and which are best for your riding.

Some hybrid board which are perfect for your first board or that one to take you a bit further include: Roxy Sugar, Nitro Mystique, Lib Tech Skate Banana

Drop in and have a chat so we can help you find your next shred stick!